Read Rob Holmes review on the NV161/3 Pronar spreader, as published in the Farmers Guardian (14th May 2019) https://www.fginsight.com/vip/vip/polish-built-muck-spreader-proving-its-worth-for-british-grower-85262

Polish-built muck spreader proving its worth for British grower.

Replacing a muck spreader hire with spreader ownership, one Derbyshire grower has opted for a Polish-built Pronar machine. It has often been said that if it looks right, it usually is right.

And that is what Rob Holmes thought about Pronar NV161/3 spreader when he saw it at the 2018 Lamma Show.

He says: “I liked the look of the spreader. The finish looked good and welds looked tidy. It certainly did not look cobbled together.

“I figured that with half-decent build quality coupled to a keen price, it could well be worth a punt. The alternative was to look at a 10-year-old refurbished K-Two for very similar money or stick with hiring. So we decided to buy a new Pronar NV161/3 spreader without a demonstration.”

While this might seem to some like a ‘devil may care’ attitude, Mr Holmes’ instinct has so far proved to be ‘on the money’.

He says: “It spreads muck very well, it rides good too thanks to a suspended drawbar and I am very impressed with the attention to detail on the spreader.”

This detail includes front bed chain adjusters with springs that can be easily seen from the cab.

The ladder comes with accompanying steps inside the body to simplify access for cleaning. Rear beaters use a combination of paddles and knives to pulverise and spread material, and the slurry door offers a concave profile with ribs to provide strength.

From Park Style Farm, Rodsley, Ashbourne, the Holmes family has embarked on a progressive expansion to increase the size of the farm.

The once 150-cow, 73-hectare business which Mr Holmes’ father Keith ran almost single-handedly more than 15 years ago is now a 405ha operation which combined land from two neighbouring farms and added a contract farming operation into the mix.

After a brief spell away from dairying, Mr Holmes’ brother Pete is starting to build a herd, using facilities at the recently acquired Shirley Mill Farm, which affords existing dairy facilities where 80 cows are milked.

With followers too, the farm has about 150 animals which are all generating useful amounts of muck and slurry that can be returned to grass and arable seedbeds.

“We had been renting a 12-tonne Western spreader locally and it was working out well. But with more and more muck to spread, the workload has grown to a point where we started to look at rental expenses compared to ownership. The long-term view tipped us into ownership.”

The farm was renting a spreader during summer to get manures onto stubbles, but that too caused unwanted pressure.

“When you rent a machine, you do not want it sat idle knowing that the clock is ticking on a daily basis. Especially during harvest, when it meant parking the combine and going spreading on stubbles, when we should have been combining.”

The farm grows 16ha of wheat, 40ha of winter barley, 36ha of oilseed rape, 36ha of spring beans and 20ha of oats; the latter for whole crop.

The remaining acreage is grass, comprising a mix of leys and land under Higher Level Stewardship.

With the spreader offering working widths of eight to 12 metres, Rob finds himself running on 24m tramlines and filling in between.

He says: “We are getting a very even spread. The rear beaters seem to break up material very well and not drop lumps.”

He adds that the area below the rear beaters is not enclosed, so it does not block up with manure, although a curved rear beam that protects the driveline to the spreader’s gearboxes can be a haven for a build-up of muck.

He says: “If we are not careful, we can drop a few lumps here and there, when running back to the yard for the next load. And the position of the lights, below the beaters, is an area where the spreader could be improved.

“At the moment, I have to make an effort to repeatedly clean the lights.”

Classed as a 14-tonner, the Pronar NV161/3 spreader tips the scales at 14t fully laden, and carries a 10.5t payload. It was supplied with a wide-angle pto, slurry door and steel mudguards.

The spreader needs two double acting spools to operate: one for the slurry door and the other to power the hydrostatic bed drive.

Almost 12 months into ownership, was he right to take a chance?

Mr Holmes says: “I am really pleased with the spreader’s performance. Reliability has been good, although I have had a chain link to undo and refit, simply because we had one jump.

“So after resetting its position and double-checking the bed chain tension, it has been faultless ever since.”

He says that slats are a bolt-on design and will be easy to replace in the event of damage, as are the rotor’s knives and paddles.

“I like the fact it does not have sealed bearings. Grease nipples are easy to access, so the machine gets plenty of grease and I know the bearings get plenty of lubrication. It gets done because it is easy.

“Underneath, the pto driveshaft to the rear of the spreader is enclosed with tubing to prevent wrapping below the spreader.”

Powered by the farm’s 180hp MF 6480 tractor, he says the combination is a good match.

“We have some steeper banks and forward speed can drop on these, but most of the time we have enough power. Taking into consideration build quality, price and the two-year warranty, there is little to fault it,” he adds.

PRONAR is recognised as one of Europe’s largest component manufacturers across Poland. Its extensive range includes trailers, grassland kit, specialist trailers for forestry and municipal equipment, and turns over €180 million (£154.3m) each year.

The firm also produces wheels and axles, plus pneumatic and hydraulic systems for agricultural and ground care equipment. It also builds a range of machinery for recycling applications.

Pronar UK was set-up in 2016 by David Orrell, as the importer for the Polish-built kit focusing on trailers, muck spreaders, gritters, snow ploughs, and grassland equipment. Based at Gisburn Auction Market, Clitheroe, Lancashire, and operating primarily with direct sales. 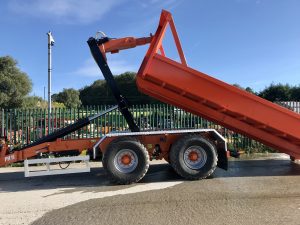